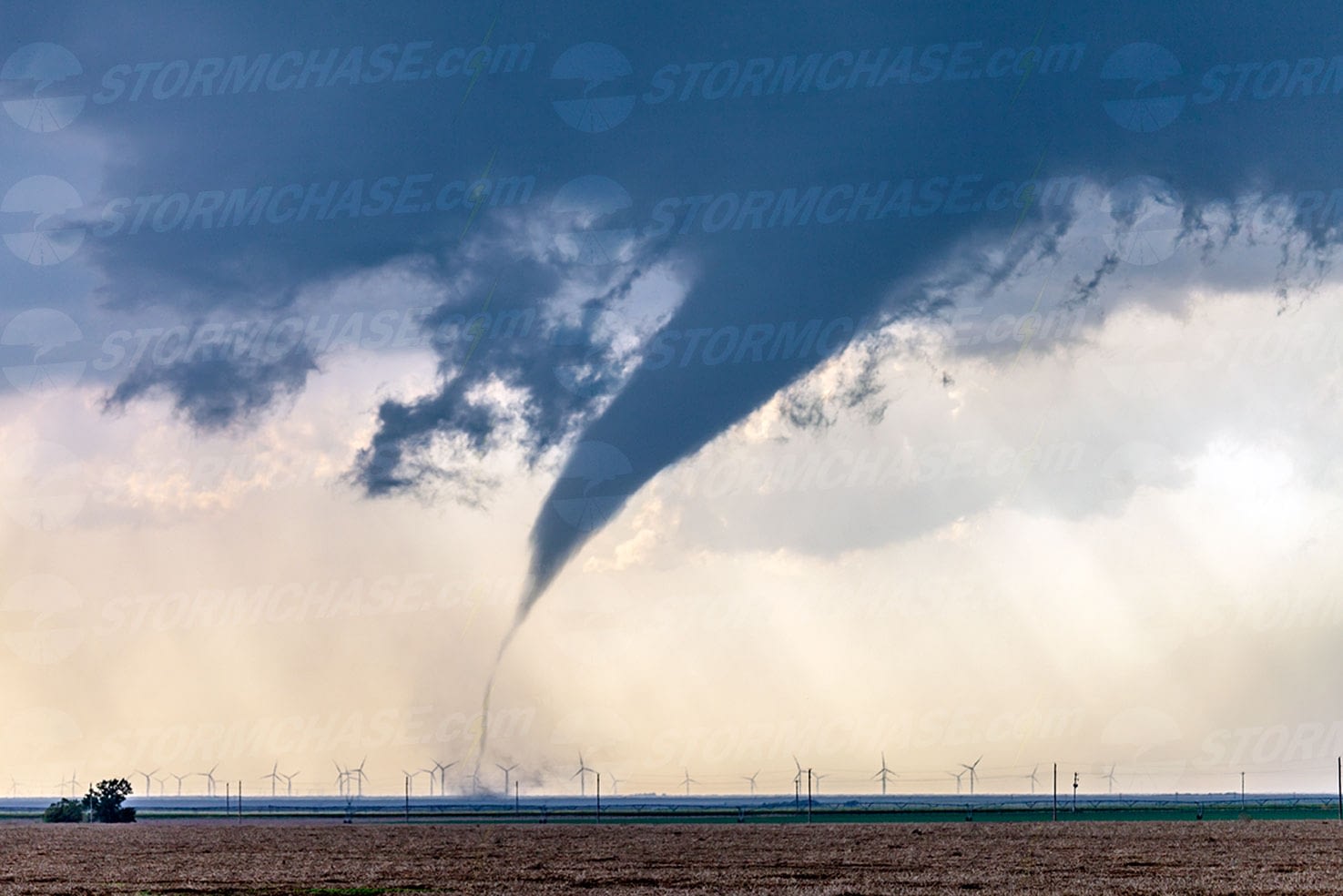 Storm chasers have their individual reasons why they began chasing storms. Most have had a life-long interest in severe weather. All share a commonality, a passion for storm chasing.

Storm chasing is the pursuit of severe weather regardless of motive. Some people stereotype storm chasers as being “adrenaline junkies” who only chase storms to get a natural high. While that might be true for a small number of storm chasers, nothing could be further from the truth for most storm chasers. In fact, I’ll bet those who say such things couldn’t name five storm chasers. Further, those they can name are likely all former reality television subjects.

There is nothing else on Earth like a supercell thunderstorm. A supercell’s anvil can reach heights of over 13-miles above the ground. The processes inside a supercell create many different features below the anvil. There is a majestic beauty of these storms that is highly addictive once witnessed. It has nothing to do with an adrenaline rush. It’s more of a deep appreciation of nature’s scientific art.

No two storms are identical even though all supercells share a common structure. From the cloud formations to the colors, storms always make interesting and amazing photographs. Not every supercell produces tornadoes. And thus, not every storm chaser chases specifically for tornadoes.

What is the Goal of Storm Chasing?

Storm chasing has greatly advanced scientific knowledge of meteorology resulting in better warning decision processes used by forecasters. For example, Doppler radar was first deployed for weather observations in the 1950s but it wasn’t until the 1970s that forecasters began to understand the specific radar signatures that are indicative of tornadoes.

This happened because of storm chasers who were in the field and communicating with forecasters observing radar. The storm chasers would tell the forecasters when a tornado occurred and the forecasters noticed the tell-tale sign of the “hook echo” on the radar. As a result, throughout the 1980s warning times for Tornado Warnings became much more reliable.

For most people, storm chasing is a hobby. They’re in it for vistas that one can only see by the extreme amount of preparation and study that storm chasing requires. A small few, like myself, operate part-time seasonal businesses. We too, however, have a deep appreciation of what I call nature’s scientific art and want to share that experience with others in a safe and responsible way.

Do Storm Chasers Get Paid?

There is a lot of myth surrounding the money that storm chasers can make. When I first started storm chasing in the 1990s, it was possible to make several thousands of dollars for a few seconds of video by licensing the video to network news. However, social media and cell phones have completely destroyed that market.

Today, everyone has a cell phone capable of recording decent quality video. Further, everybody seems to have an account with a social media platform such as Twitter. News networks have figured out these two things work in their interests because everyone likes their five seconds of fame. You may have noticed journalists from various network stations on platforms like Twitter asking for free usage of someone’s photos or videos. These networks are not paying for anything that they can now get free.

Anyone under the impression they’re going to make money from licensing video this day and age is in for a disappointment. Technology has made it easier than ever to chase storms. However, the same technology has destroyed any hopes of earning money to recover the financial losses of the chase itself.

How Do You Become a Storm Chaser?

You simply become a storm chaser by chasing a storm. Of course, if you want to chase a storm safely, you’ll need a lot of preparation and study. Do not attempt to chase storms without prior knowledge or experience. Storm chasing can be extremely dangerous and can get you killed.

The best way to get into storm chasing is to find a friend who has prior experience. Learn everything you can about convective forecasting, interception strategies and even storm chasing history. There are many resources that can assist your educational goals both on and offline. Forums such as StormTrack.org may seem like an ideal place to start. But, they tend to be more opinionated than educational.

My personal recommendation is to start with resources such as this Tornado Forecasting Workshop video series instead. It’s presented by a well respected convective forecaster at the Storm Prediction Center who is also a storm chaser. Additionally, anything authored by Chuck Doswell such as Severe Convective Storms will greatly expand your knowledge of severe weather forecasting.

Tim Vasquez has authored a large number of books and software aimed at helping people better their forecasting skills. The Storms Forecast Simulator is one of the best training resources available. This software gives the user the same data that storm chasers use in real-life. You begin the day with numerical models, station plots and satellite imagery and pick a target location.

Throughout the training day, as new data becomes available, you narrow down your target. At the end of the training day, you learn if you caught a tornado or need to invest in some sunburn creme. Either way, it’s great fun and highly educational.

Once you feel comfortable in your forecasting abilities, you then need to understand storm structure. A Skywarn training class is usually about 45-minutes and presented by your local National Weather Service office. This class will give you the basics on storm structure, but don’t walk away feeling that you’re there.

Take this information and dig in to learn more. Study images of supercells, if you can find images of storms taken from the ground and their satellite and radar imagery at the same time, that’s a bonus. Having a deep knowledge of storm structure is key to operating in a safe manner near supercell thunderstorms.

After you have forecasting and storm structure down, then study storm interception strategy. This is where reading the personal chase accounts from other storm chasers can be beneficial. There is a lot to interceptions that can only be learned from the field. Things such as road quality as well as road networks, in general, come into play.

A classroom can make you a better forecaster. But storm chasing is the only thing that can make you a better storm chaser! Start out by chasing with a storm chasing tour group or with a friend who has experience. After a few seasons, you can decide for yourself if you’re comfortable enough to attempt chasing on your own. If you have any doubt, then you’re not ready. Once you are ready, then get out and go chase a storm!