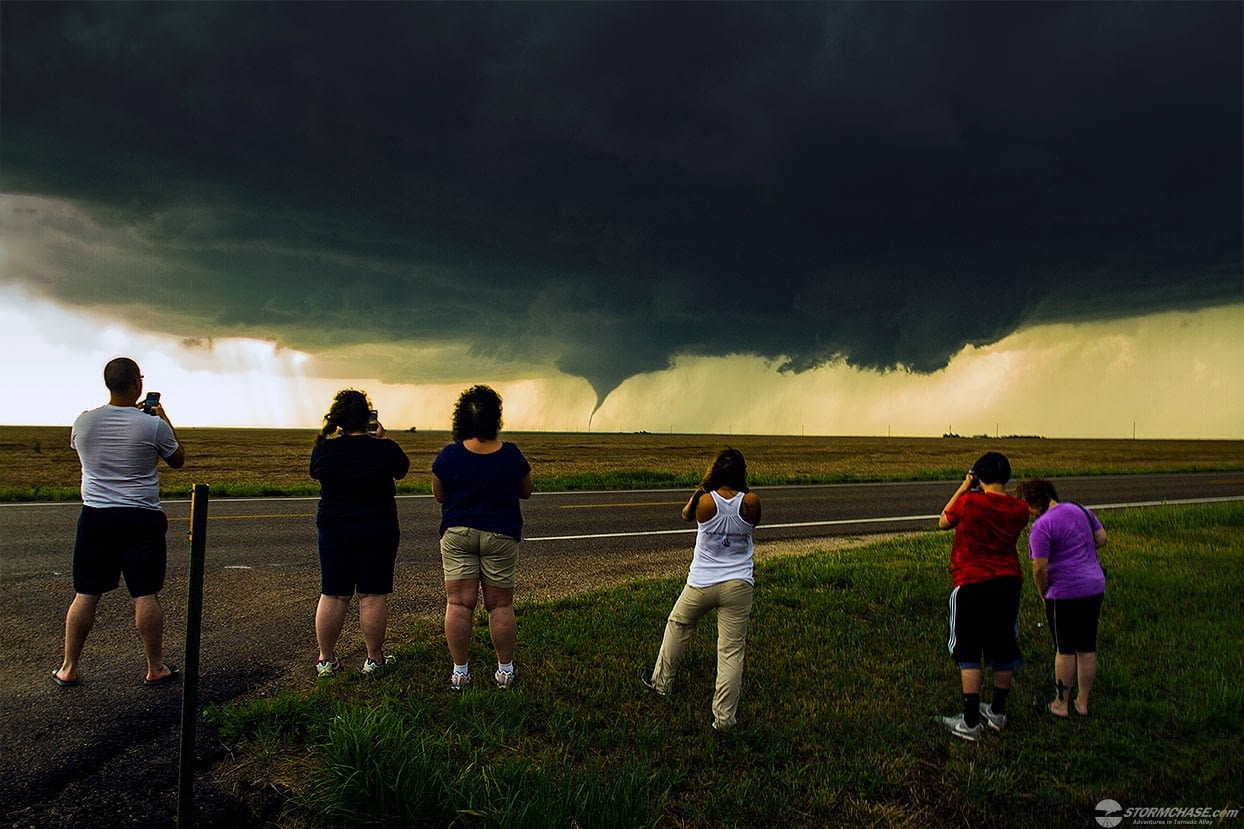 Storm chasing is the pursuit of severe storms, regardless of motive. A chase can be as simple as following a storm near the town a storm chaser resides in. Or, it can be as complex as driving across several states.

Like most activities, storm chasing includes associated risks. Mitigation of such risks will increase overall safety through knowledge, preparation, and making good decisions.

Storm chasing began in the late 1950s when David Hoadley started pursuing storms in North Dakota for photography. Chasing gained in popularity throughout the 1970s and 80s as research into severe storms began to grow.

About 50-years after storm chasing began, chaser Jeff Wear lost his life when a sudden downpour caused his vehicle to hydroplane into oncoming traffic. Jeff was the first storm chaser to die in a weather-related accident, even though it was officially a traffic accident.

Storm chaser Andy Gabrielson lost his life due to a wrong-way driver in 2012. Five years later, two Missouri based storm chasers who worked for The Weather Channel slammed into another chaser in Texas after running a stop sign. All three chasers died in that accident.

Traffic accidents are unfortunately not the only thing that has killed storm chasers. In 2013, storm chasers Tim Samaras, his son Paul and chase partner Carl Young lost their lives after a large, violent tornado overtook them near El Reno, OK.

The team was working to place in-situ probes in the tornado’s path. An exceptional combination of events happened that day, in which an already large and rain-obscured tornado swelled within less than a minute to 2.6 miles (4.2 km) wide simultaneously as it changed direction and accelerated.

Additionally, a crew from The Weather Channel experienced a vehicle rollover as the rear-flank downdraft pushed them off the road.

There can be no argument that every storm chaser impacted by the El Reno Tornado made bad decisions. That said, the storm itself was highly unusual and the circumstances were exceptional.

Tornadoes generally travel in a rather straight direction. This tornado traveled to the southeast and then to the northeast. It also grew extremely fast to become a very wide tornado with multiple vortices, making it extremely erratic.

Other Risks Associated With Storm Chasing

In my more than 20-years of storm chasing, two risks, in particular, have always concerned me the most. The first is other storm chasers and the second is lightning.

A storm chaser has control over their actions and decisions. We can decide to observe a storm from a safe distance from a tornado so winds and debris are not a factor. However, lightning is different.

A lightning bolt can travel up to 25-miles from the source. A storm chaser will not see anything if they stay 25-miles away from the storm they are chasing. As a result, we are always at risk of lightning strikes.

I have had two very close calls in my life, one of them during my childhood well before I knew anything about storm chasing. That event sent me into the emergency room completely unresponsive and without a heart rate.

Lightning nearly struck me a second time while storm chasing in Texas in 2005. While documenting a multi-vortex tornado about a mile away, lightning hit a power transformer just behind me.

The transformer exploded and the flames caught my shirt on fire. I quickly stopped, dropped and rolled and continued to roll right under my chase vehicle with my camera still recording the tornado!

Lightning is very dangerous and unpredictable. Other than deciding to not chase at all, there is no way to mitigate its dangers. However, the safest place to be when lightning is active is inside the vehicle. Most people still believe it’s the rubber tires that protect people, it isn’t.

A vehicle’s metal roof and sides will protect its occupants from lightning. When lightning strikes a vehicle, the current flows through the frame and into the vehicle’s ground. As a result, if you’re in a lightning core, the safest thing to do is get back into your vehicle and don’t touch anything that is made of metal.

I also have large fuses and safety disconnects on my vehicle’s after-market electronics such as radios, scanners, and computers. I can even disconnect my roof-mounted antennas with a simple switch. This will prevent current from flowing into these devices if the vehicle is hit by lightning.

Aside from lightning, the biggest risk to storm chasers, in my opinion, is other storm chasers. I have noted on several occasions storm chasers operating a vehicle with their eyes on the storm and not the road. This is very dangerous particularly because storm chasers often stand along the sides of the road while taking photographs.

As a result, it’s best to mitigate this risk by not setting up a tripod on the shoulder of a highway. In fact, try to get as far from the road as safely possible, but leave yourself room to get safely back to your vehicle in a timely manner if need be.

With some careful planning and a little common sense, most risks can be extremely lowered. However, nothing can remove all the risks associated with storm chasing. That said, even golfing can be dangerous. Here are some tips that can help keep you safe while chasing storms.

Always keep your head on a swivel. We tend to look forward, a lot. It’s easy to become fixated on a specific feature of a storm or not pay close attention to a storm while driving away from it in order to get to the next viewing location. When operating within a storm environment, a chaser should always be aware of what is happening around them. A chase partner with an extra set of eyes will help to keep you safe.

Avoid the most intense areas of storms. For one reason or another, some storm chasers are always putting themselves at risk to obtain the best viewing area of rain-wrapped tornadoes. Typically, they attempt to place themselves between the storm’s precipitation core and the storm base in order to look into the “notch” of the storm.

Storm chasing veteran Chuck Doswell coined the term “Yahoo Chaser” to describe such individuals. The problem with attempting to obtain a viewing area near the storm’s core is that it is easy to lose situational awareness and as a result, these storm chasers are a danger to themselves and everyone in their vehicles. There simply isn’t a single good reason to do this. When storm chasing, monitor the storm from the safest location possible. This is typically from the southeast.

Always have an escape route. Be conscious of the road network that you’re operating in and know where all the options are relative to your location at every point during the chase. Determining an escape route requires a great deal of knowledge about the storm’s movement and behavior.

Keep in mind that there are exceptional circumstances that might occur, such as a tornado making a sharp turn towards your location and be ready to move to a safe location. Be mindful of the types of roads available and that road conditions can change quickly in a storm’s environment.

Keep your engine running. If a vehicle’s engine is running there is no chance it won’t start because it already has. When viewing storms, even when away from your vehicle, keep the engine running. It’s good practice to shut off the A/C as well to prevent the engine from overheating.

Never drive into areas where water covers the road. Floods kill more people per year than any other weather-related event. It only takes a few inches of water to lift a vehicle and to relocate it. If water covers a rural gravel or dirt road, there is no gravel underneath it, only mud that will bury your vehicle to the axles. You don’t want to become stuck when trying to chase a storm. Plan your routes so that you don’t become trapped between a storm and a potentially flooded roadway.

Be extra cautious at night. It is more dangerous to deal with something you cannot clearly see. Storms at night present special problems for storm chasers and you should be extremely cautious when observing storms after dark. Take extra precautions such as staying several more miles away than you would during daylight hours and be very careful of flash floods. A simple rule here, if you’re not 100% comfortable with chasing storms at night, then don’t.

And one final tip…

Don’t bend to peer pressure. You and only you know your limits. You have to rely on your good judgment and that depends on your training and experience. If you’re chasing with a partner or with friends don’t let them talk you into putting yourself in a situation that you’re not entirely comfortable with. There is no shame in saying no. Remember, there are old storm chasers and there are bold storm chasers, but there are no old bold storm chasers.

Be a Safe Storm Chaser

Storm chasing can be safe, fun and exciting. Don’t take risks that you’re not comfortable with and if you do these things, with some proper planning, you can mitigate much of the dangers associated with storm chasing.

As an alternative to chasing by yourself, seriously consider joining a storm chasing tour. While this removes the decision making from you, tours are typically lead by individuals with years of experience and on our tours, everyone is a storm chaser. Remember the “keep your head on a swivel”? If you happen to sit in the back of the chase van, you become my eyes behind me. It’s also a great way to meet likeminded people and we have a lot of fun as well.