A new disease has been identified this year. It is known as Supercell Deprivation Syndrome or SDS. Although there is no evidence showing that SDS causes any direct physical harm, the psychological effects are significant and can be debilitating causing strange and unusual behavior in otherwise normal storm chasers…assuming of course there is such a thing.

It was difficult to isolate as the symptoms and the disease itself slowly and subtly spread throughout our ranks. We are publishing our research in an effort to better cope with the disease and to alert others in the storm chasing community to this grave threat against our mental stability and well being.

We have concluded that SDS is usually seasonal coinciding with the winter months increasing in severity in February and up into March with a marked decrease between March and June with few if any cases noted.

We believe this to be a remission stage in the cyclic nature of SDS. However, with the exception of 2015 Memorial Day weekend, we noticed a dramatic increase in cases and severity this past year through the spring, summer and early parts of fall.

This is alarming in the sense that winter is approaching which will only increase the effects…..fuel to a raging fire (we may have to make another graph). We may have yet to see the most extreme cases of SDS as it is possible to see epidemic proportions.

Usually, just one of these causes by themselves do not produce a severe case of SDS.  We have found that 3-4 can have a significant effect. More than that can create severe cases. Some storm chasers, especially in Texas, have experienced all of these causes this year which have resulted in extreme cases.

8.)  More tornado watches issued for Oregon than for the patient’s home state in Tornado Alley.

10.)  TWC anchor constantly stands in front of a patient’s area because nothing is happening there.

Although it is likely for a chaser to perhaps exhibit one or two of these symptoms, several together should raise concern. There are a few symptoms that are very serious independently and no other symptoms are necessary for immediate admission.  Since the study of SDS is in it’s initial stages and the disease is progressing and spreading, some symptoms may not have yet been identified.  These will be updated on an ongoing basis.

1.)   Innate fascination with the “little tornado” in the bathtub drain

2.)  Creates a back-sheared anvil and overshooting top with mashed potatoes or ice cream

3.)  Closely studies a piece of popcorn comparing it to a cumulonimbus head.

6.)  Runs outside in underwear when thunder is heard.

7.) Begs neighbors to open their doors all at once letting the air conditioned air out in hopes of creating some sort of mesoscale lifting/convergence event to initiate convection.

8.)  Under cover of darkness, tries to “trigger” Civil Defense Siren in his/her neighborhood.

(some patients have been found with a large supply in refrigerator)

11.)  Sleeps in front of intake vent of a central heat/air unit to simulate “inflow”

12.) Chases insects in the yard with Shop Vac to simulate livestock being sucked up by a raging F5  (examination of some patients’ Shop Vacs also found plastic army men, hot wheels, and toy cows).

13.)  Purposely moves into mobile home. May even “disguise” chase vehicle as one hoping to “lure” a tornado.

14.) Strange facial contortions, twitching and extreme paranoia is observed when the words “El Nino”, or “Upper Level Ridge” is heard by patient. Some patients have had to be heavily sedated when tested on this one.

15.)  Constantly testing alert tone on wx radio to make sure it is working.

16.) Personal appearance is sometimes altered in extreme cases. Some patients don a fake Fu Manchu mustache, brimmed straw hat and glasses.  Others seem to try and resemble a certain TV meteorologist from Chicago.

17.)  Simulates hail by throwing ice cubes up in air allowing them to fall upon the pavement, chase vehicle or the patient him/herself.

18.)  Renames pets, children and even him/herself  with terms taken from the Storm Spotter Glossary or names of famous tornadoes such as Xenia, Jarrell, Lancaster, Dallas, etc.

22.)  Fogs up bathroom then turns on hair dryer to simulate dryline punch.

23.)  Imagines things on forecast maps that only the patient and no one else can see…delusional.

26.)  Pictures of tornadoes and supercells found pasted on every wall in patient’s living quarters in an erratic manner similar to that of stalkers and obsessed individuals.

27.)  Actually calls “Psychics USA” hotline because patient does not believe MRF and ECMWF showing upper ridge for next two weeks.

28.)  Little if any social life. Patient spends excessive amounts of free time on the internet looking at all of the different storm pics and making web pages such as this one.

2.)  Shock therapy.  Undesired effect….patients would cry out “CG!  We have CG!” as we juiced them.  Some patients were also caught in the room trying to recreate CG’s with the equipment using each other as electrodes.

The only cure we have found so far is actually experiencing a supercell in person.   If you are experiencing any of the above symptoms, we recommend you call our SDS Treatment Center immediately and book your appointment on a 2016 Storm Chasing Tour with StormTours.com.

Our doctors are standing by.

SDS is a term that has become common amongst storm chasers. It was originally coined in the early aughts by Texas based storm chaser Steve Miller-TX (@SteveMillerTX) with this original work above. The original website has long disappeared from the Internet, but due to the significance of the terminology we have opted to preserve the original text, formatted and verbatim as Steve originally authored and posted it here on StormChase.com, where we hope it will forever reside for future storm chasers to learn and understand storm chasing culture. 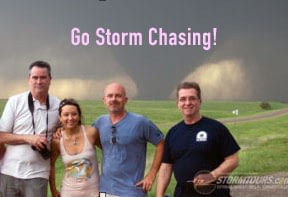